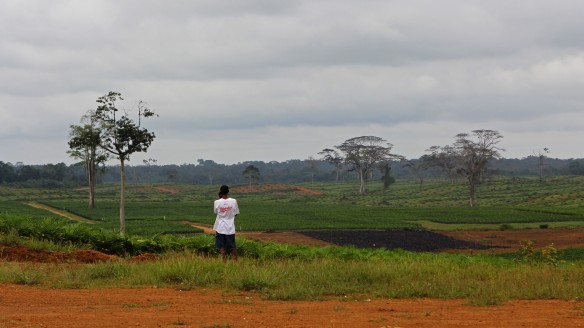 Looking out over a new oil palm plantation in Liberia. Credit: Dan Klotz

In December, I spent a week in Liberia with an Agence France Presse (AFP) reporter exploring two large-scale land acquisitions in which the Liberian government turned over large swaths of land for oil palm and rubber plantations, ignoring the rights of the communities that live on the land. The trip was part of the outreach work I have been doing for Rights and Resources Initiative (RRI).

Underlining the dire problems confronting these communities, four people with whom we visited were arrested shortly after we left.

After the trip, the AFP reporter filed two feature-length stories detailing the difficulties inherent in these transactions (http://bit.ly/YaJ0G4 and http://f24.my/UhCU62). Last week, my photos from the trip were featured in a slide show on AllAfrica.com (http://j.mp/15CeiZC) that highlighted two new reports from RRI.